The Kavli Prize, awarded every second year, is endowed by a partnership between the Norwegian Academy of Sciences, the Norwegian Ministry of Education and Research and the Kavli Foundation. It acknowledges seminal work of scientists in astrophysics, nanoscience and neuroscience.

The prize consists of $1 million € shared by all 4 winners.

The work of these brilliant scientists led to the creation of aberration corrected lenses and made sub-Ångstrøm imaging and chemical analysis in three dimensions a standard characterization method. Two of them have founded companies (Nion Co and CEOS GmbH) and commercialized their correctors contributing further to the major impact of their scientific work. Since then their microscopes have played an enormous role both in fundamental science and technology, where they are used, among others, by semiconductor, chemical and automotive industries.

Harald Rose's recognition is owed to proposing a novel lens design, the Rose corrector, enabling aberration correction in transmission electron microscopy that can be applied to both conventional and scanning microscopes.

Maximilian Haider's award is for the realization of the first sextupole corrector, based on Rose’s design, and for his role in the implementation of the first aberration corrected conventional transmission electron microscope.

Knut Urban is awarded for his role in the implementation of the first aberration corrected conventional transmission electron microscope.

Ondrej L Krivanek: The prize is in recognition of his work on the realization of the first aberration corrected scanning transmission electron microscope with sub-Ångstrøm resolution, well suited for spatially resolved chemical analysis using a quadrupole-octupole corrector.

The European Microscopy Society (EMS) congratulated these four geniuses of microscopy and wished them the best for the future.

This year, the Nobel Prize in Chemistry  has been attributed by The Royal Swedish Academy of Sciences to:

for the development of cryo-electron microscopy, allowing researchers to see biological molecules frozen in action. This method has moved biochemistry into a new era. 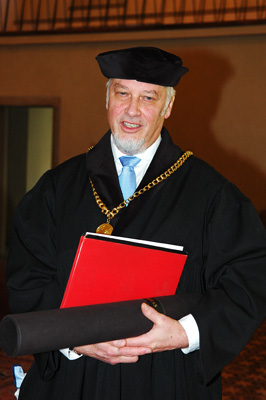 On February 1st, 2007, Professor Ueli Aebi from the University of Basel, Switzerland, received a Doctor honoris causa (Dr. h.c.) degree in the medical sciences by Charles University in Prague.

The Scientific Board of the First Faculty of Medicine of Charles University proposed Professor Aebi to receive this honorary degree (1) on the basis of the pioneering contributions he has been making throughout his career towards a structure-based functional understanding of molecular machines, and more generally, supramolecular protein assemblies by a hybrid methods experimental approach involving light, electron and scanning probe microscopies, X-ray crystallography, molecular cell biology, and rational protein design; and (2) for his continuous support of Czech science and education and, more generally, his many charitable activities.
The ceremony took place in the big aula of the Karolinum, the historical building of Charles University.

We congratulate our EMS President with this well-deserved honor.

For more information, please go to: 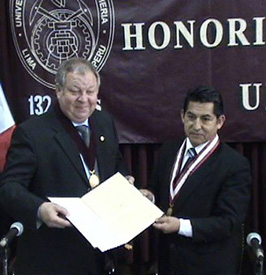 This morning, in solemn ceremony presented in the Sessions-Room of the University Council, the National University of Engineering, granted the Academic Degree of "Doctor Honoris Causa" to Doctor Dirk Van Dyck, recognized scientific researcher who has contributed to the development of Physics at Postgraduate Level in this House of Studies (University).

Doctor Dirk Van Dyck, studied physics in the cities of Antwerp and Brussels (Belgium). At the moment, he is Research Vicerector of the University of Antwerp, and one of the most outstanding European experts in the area of Electron Microscopy.

He developed, with fellow researchers, the first table-tomograph on the basis of X-rays that now is commercialized by Skyscan Company.

Professor Van Dyck has published many scientific works and several books; in addition he has been advisor of 30 doctoral theses.

The imposition of the Academic Degree of "Doctor Honoris Cause", was in charge of Ms. Eng. Aurelio Padilla Ríos, Director of the National University of Engineering, who emphasized the personal and professional virtues of Dr. Dirk Van Dyck, a great scientist who has supported the development of Physics in our University.

The electron microscope is one of the most widely used research tools in modern science, playing a pivotal role in virtually all areas of natural sciences, as well as in a broad range of technologies, from basic research to vital industries.

Since its invention in 1931, the performance of electron microscopy has been limited by the effects of the aberrations of the electron lenses used, which kept its spatial resolving power at values far below the theoretical limit. Given its broad role in advancing modern science and technology, extraordinary efforts were made, worldwide, to overcome these limitations. But, for over half a century, these attempts failed.

Working together since 1990, the three Wolf Prize Laureates jointly succeeded in realizing aberration-corrected electron optics for the first time. As a result, they have advanced the resolution of transmission electron microscopy to atomic and sub-atomic dimensions. Their work was inspired by a novel optical concept for the correction of spherical aberration of the objective lens of an electron microscope, developed by Harald Rose (born 1935, Germany). Based on this corrector principle, Maximilian Haider (born 1950, Austria) constructed the first prototypical aberration-corrected transmission electron microscope. Knut Urban (born 1941,Germany) developed this prototype into a working platform for atomic-resolution electron microscopy. He also developed the theoretical and methodological basis for extending and interpreting microscopy in sub-atomic dimensions.

For the first time, aberration-corrected transmission electron microscopy has permitted localization of atoms with an accuracy of a picometer, corresponding to one hundredth the size of a hydrogen atom. The ability to measure individual atomic positions with picometer precision and to correlate atomic-scale structure with macroscopic physical properties constitutes a major breakthrough in materials science, with implications for many other areas of science and technology. The breakthrough in exploring the microcosm comes at a time when developing nanotechnologies and getting them to work for a number of applications, calls for high-resolution, high-sensitivity instrumentation for research, synthesis and validation of novel techniques.

Within less than five years since the commercialization of aberration-corrected electron microscopy, more than 200 of these instruments have been ordered by university and industrial research laboratories all over the world, pointing to the central role that state-of-the-art electron microscopy plays in 21st century research and putting an end to decades of stagnation in this key area of scientific instrumentation and industrial technology.

By navigating through this website's pages, you accept the use of cookies that will allow us to manage this website's statistics.
If you want to know more about cookies, please refer to the "Privacy & Security" disclaimer. [X] Close